What a month it’s been. Time has escaped us on all fronts and there’s no indication the exodus will abate. My hope is that we will soon get to stop borrowing from our sleep reserves as we settle into a new rhythm and routine. The good news is that everything I have to report is good news.

I’ll begin with some clarification I should have included in the last brief post. We brought out puppy home about a week ago, on February 12th. We did not adopt him at the time of the last post. We drove out to Sulphur Springs to make our reservation selection. Now, having had him with us for a week, we are very pleased with our choice. His name is Eiger (pronounced Tiger without the “T”), named after one of the most famous (infamous, in some circles) Alpine peaks in Switzerland. It’s a little bit of his heritage mixed with my interests and an ode to one of my favorite authors, Jon Krakauer. He’s taking to the name well. 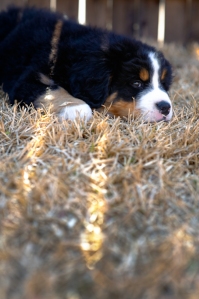 When we first met Eiger he was about five pounds. He came home with us clocking in at 15. He’s a gentle puppy, loving and relaxed (most of the time). We’re bemused by his classic Berner characteristics. His aloofness makes us giggle: we try to coax him to do some tasks and he simply watches us, entertained. So far, it’s been fun.

But it’s a lot of work. Eiger is my new baby. Unlike with our daughters in which I found I was not producing milk so I was useless throughout the nightly feedings, I do have the ability to carry a puppy outside at 3:00 AM for bladder relief. So I am getting the full experience of waking up every two to three hours. It’s tiring. I’ve been tempted to strap a diaper on him on more than one occasion. 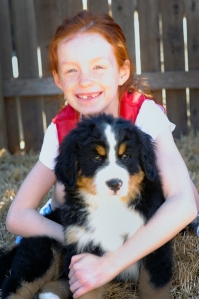 Aside from puppy trials, our schedule as booked up in other ways. Following Claire’s oral evaluation, we increased the number of therapy sessions from three each week, to four and then five. Tiffany now has a session outside of the home every day of the week. While it’s a lot, it denotes a confidence from her therapists that Claire can handle more aggressive approaches.

Of particular note has been her work with a new oral therapy. As I mentioned in the early January post, Claire can handle certain types of food and eating more will help her improve her mouth muscles. But we also need to focus on strengthening her esophageal muscles. The solution is electric. And I don’t mean that in the colloquial sense: we are strapping electrodes on her neck and electrically stimulating the muscles. I describe it using infomercial analogs: if you remember the ab belts that were advertised on TV that work your abs while you’re sitting on the couch with a beer and potato chips, then you understand the technology. The electrodes cause Claire’s muscles to expand and contract, with the hope that the muscles necessary for swallowing and speech will strengthen.

We’re in the very early stages of seeing some results. While Claire’s swallow reflux is improving, what has been more exciting is her new vocal variety. In the last week, Claire has started making new sounds. Last night we were sitting with her and she began adding an “m” sound before her standard cry. Her therapists also noted the changes this week and believe that she is making initial attempts to speak. Our in-home nurse told Tiffany yesterday that she thinks Claire is struggling to say “Mama.” While we remain cautious, our hopes have taken a shot of adrenaline this week.

But the hope boost has not come from the vocal variety alone. Claire was laying on her side on Wednesday watching TV. I looked down at her as she flexed her legs in and out in normal fashion. She fell off her pillow at one point, obscuring her view of the TV. I gently teased her for falling off the pillow. I left her in the position, however, because she had ended up on her belly which is a good therapy position for her. The Claire started rotating. It was slight at first. She’d move her legs and her body would shift a degree. At this point she wasn’t aware of what she was doing. But we told her that her leg movement was causing her to rotate and that she should try more. She did. This is one of the key steps in motor recovery: Claire needs to begin recognizing the causal relationships between her body and her intentions. When she recognizes that she can use her leg to make her move and she can direct that effort, it’s a big step. By the end of this initial escapade, Claire had rotated herself 210 degrees from her original position.

We are excited for a number of reasons, but there are some critical few that make us happy. The first and foremost, is the effect this is having on Claire’s motivation and perspective. It’s been such a long push already for our four-year old fighter. These changes are material for her: she recognizes the improvement. And we’ve seen the change in her disposition. In fact, we believe that she’s working hard to smile again. It makes us happy to see how much strength she’s taking from the recent developments. The second reason is the impact it has on our family as a whole. It’s difficult going through what feels like a drought of measurable, significant improvement. Our collective spirits are lifted.

These recent developments are bolstered by the news we received at Claire’s last OCH Dallas check-up. Claire’s vision has greatly improved and her responsiveness is marked. Claire’s primary OCH doctor noted that she believes that Claire’s cognitive functions are largely protected and that the biggest hurdle is her motor ability. This is consistent with what we’ve seen in the MRIs and what we’re now seeing with her improvement. Overall, it’s been a month filled with welcome news.

The rest of our month has been filled with Colorado friends and family visits. Our family got some quality time with our friends Esther and Gordon, complete with photo shoot. We welcomed both sets of our parents to the home in January and February. We spent Super Bowl Sunday with good friends and the Spring soccer season is ramping up. All in all, we’re content right now. 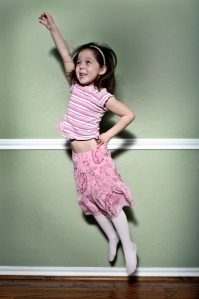 Like the rest of the country, we’ve dealt with our share of weather and gone through several chords of wood in the meantime. The snow’s been nice, but we’re definitely ready for Spring and the additional changes it brings. Thank you as always for your thoughts, prayers and support. Enjoy your weekend!

View all posts by Tyler & Tiffany